Greenpeace report: oil in the cloud 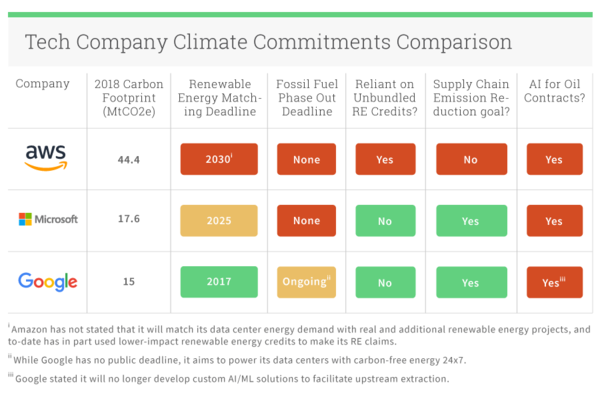 Overview of Greenpeace’s findings in their Oil in the Cloud report.

Greenpeace released their Oil in the Cloud report . Focusing on Google’s GCP, Amazon’s AWS, and Microsoft’s Azure, the report covers in what ways these cloud companies are working with oil and gas companies. We’ve already heard a lot about this: it’s been highlighted in a viral Vox video, on the CCAI forums, and in the Tech Won’t Drill It pledge (see DT #33). This report adds an exhaustive overview of how cloud services—and sometimes machine learning—are involved in the different phases of oil and gas extraction:

Greenpeace found specific examples of contracts that all three companies had in at least one of these phases. It also notes that because of public outrage over the past few months, all three companies have deemphasized their oil and gas products on marketing websites. So far, though, it looks like only Google has actually committed to no longer taking on new oil and gas contracts (but still continuing with its existing contracts).

Overall, Amazon and Microsoft, the largest players in western cloud computing at 33% and 18% market share respectively, come out of this report looking pretty bad. Google, the smallest at 8%, is taking the biggest steps in the right direction.

Google also the only one of the three that’s already matching its datacenter energy use with renewable power purchases, and doing some very cool work to shift its workloads to happen when electricity grids are cleanest. If you’re working in ML and training your models in the cloud, encouraging your company or group to switch to GCP—away from AWS and Azure–is probably one of the highest-impact actions you can take for climate change right now.

This section of Dynamically Typed covers climate change prevention and adaptation projects that use AI.