Hey everyone, welcome to Dynamically Typed #45! I’ve got two feature stories for you today: one on Al Gore’s new Climate TRACE coalition for tracking greenhouse gas emissions using AI, and one on Methods, a useful new resource by Papers with Code. For productized AI, today’s quick links include an Amnesty International case study on using AI for human rights resource, Google’s open-source release that I think will power its next generation of voice assistants, and follow-ups on the facial recognition saga in the United States. And finally, I found a few more useful ML research tools and a cool AI-powered animation software demo.

(By the way: Plumerai is hiring for several roles across our Amsterdam, London, and Warsaw offices—come work on making deep learning radically more efficient with me and my amazing colleagues!)

Our first-of-its-kind global coalition will leverage advanced AI, satellite image processing, machine learning, and land- and sea-based sensors to do what was previously thought to be nearly impossible: monitor GHG emissions from every sector and in every part of the world. Our work will be extremely granular in focus — down to specific power plants, ships, factories, and more. Our goal is to actively track and verify all significant human-caused GHG emissions worldwide with unprecedented levels of detail and speed.

Extracting information from satellite imagery is shaping up to be the killer app for climate change AI: we’ve previously seen it used for predicting electrical grid resilience (see DT #14), locating solar panels (#29), tracking deforestation (#25, #28, #39), and classifying farming land use (#41). At the NeurIPS 2019 panel on AI for climate change research (#30), former head of Google Brain Andrew Ng also mentioned that the ability to train models on small satellite datasets is one of the machine learning advances he was most excited about for climate projects.

All this is to say: I’m extremely excited to see such a broad coalition—its founding members include “Blue Sky Analytics, CarbonPlan, Carbon Tracker, Earthrise Alliance, Hudson Carbon, Hypervine, OceanMind, and Rocky Mountain Institute”—launch as an independent observer of greenhouse gas emissions. Their goals are certainly ambitious:

Through Climate TRACE, we will equip business leaders and investors, NGOs and climate activists, as well as international, domestic, and local policy leaders with an essential tool to fully realize the economic and societal benefits of a clean energy future, while ensuring that no one — corporation, country, or otherwise — will ever again have the ability to hide or fake their emissions data. Next year, every country in the world will gather in Glasgow, Scotland, to enhance their commitments to the Paris Agreement and raise collective ambition in line with what the world’s scientists tell us is necessary. We at the Climate TRACE coalition hope to support these COP26 climate talks with the most thorough and reliable data on emissions the world has ever seen.

The rest of the launch post goes a bit into how their GHG emissions observation will work, but beyond mentioning that they’ll do sensor fusion on visible + infrared imagery and satellite + radar measurements, Gore and McCormick don’t go into much technical detail yet. They mention that this will follow in future posts, which I’ll be sure to link to here when they come out.

For now, they’ve set up a number of online profiles to follow for updates (website, Twitter, GitHub, LinkedIn); David Roberts at Vox also wrote a nice feature about how the coalition came to be. 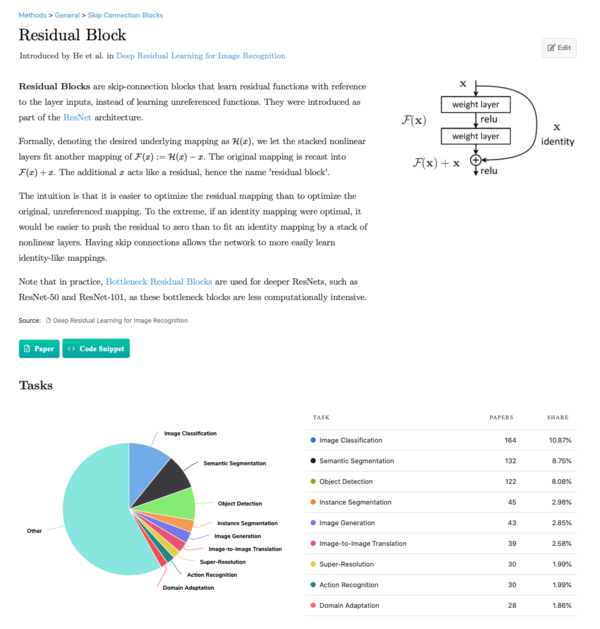 Papers with Code’s Methods page for the residual block (cropped).

A few weeks ago, Papers with Code launched Methods , a knowledge graph of hundreds of machine learning concepts:

We are now tracking 730+ building blocks of machine learning: optimizers, activations, attention layers, convolutions and much more! Compare usage over time and explore papers from a new perspective.

I’ve started using Methods as my go-to reference for many things at work. Sitting at a more abstracted level than the documentation for your ML library of choice, it’s an incredibly useful resource for anyone doing ML research or engineering. Each Methods page contains the following sections:

I’ve found the last of those sections to be especially handy for answering those hard-to-Google “what’s the name of that other thing that’s kind of like this thing again?” questions. (Also see this Twitter thread by the project’s co-creator Ross Taylor for a few example uses of the other sections.) Methods launched just a month ago, and given how useful it already is, I’m very excited to see how it grows in the future.

One additional feature I’d find useful is the inverse of the components section: I also want to know which methods build on top of the method I’m currently viewing. Another thing I’d like to see is an expansion of code links for methods to also include TensorFlow snippets—but since Facebook AI Research bought Papers with Code late last year, I’m guessing that keeping these snippets exclusive to (FAIR-controlled) PyTorch may be a strategic decision rather than a technical one.

If you enjoyed this issue of Dynamically Typed, why not forward it to a friend? It’s by far the best thing you can do to help me grow this newsletter. 🌞