This week, Google had their yearly I/O developer conference. They announced a slew of new AI-powered features for their services, from automatic subtitles for any video on an Android device to an menu-reading AR app that shows you photos of popular dishes at a restaurant.

OpenAI also responded to community concerns by open-sourcing a larger version of their GPT-2 language model, and Dropbox published a deep dive on the process of building a machine learning document recommendation feature into their app.

(Small note: today’s issue is a bit shorter than usual because I’m in full-on exam crunch mode—I had one last Wednesday, and two more coming up tomorrow and Tuesday. Final pre-thesis stretch!) 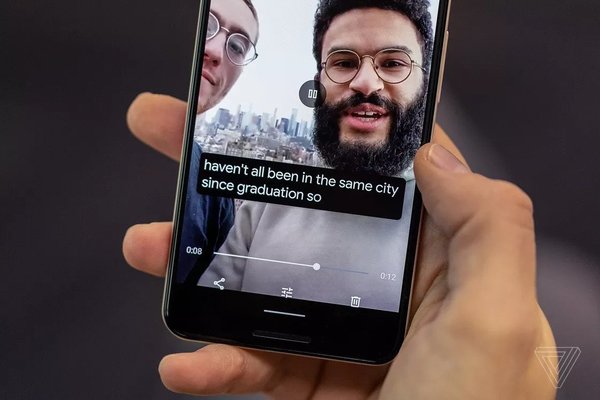 Live Caption will add subtitles to any video playing on an Android device. (Vjeran Pavic, The Verge)

Google announced a slew of new features across their products at I/O, their yearly developer conference. Here are the ones that jumped out as productized AI to me:

All these announcements underline just how much Google is investing in machine learning, both on the research and product sides, and that AI is now a big part of pretty much every part of the company. More about I/O here:

Dropbox is using machine learning to predict what file you need next, and software engineer Neeraj Kumar wrote a great post about their journey building this feature for the Dropbox tech blog. The team started with an initial heuristics-based baseline, which allowed them to design the surrounding infrastructure and front-end code, and to monitor users’ response to the feature: does it actually help them get to the file they’re looking for faster?

With that baseline in place, they figured out what types of file-use patterns the heuristics-based method wasn’t picking up, and used that to design several iterations of a machine learning model. Kumar’s post dives more into this, as well as some other interesting production issues they ran into, from figuring out what metrics to use to working out how to perform statistically significant experiments while the app’s UI changed. Read it here: Using machine learning to predict what file you need next.

Microsoft is adding an AI-powered upgrade of its spell checker. The new feature is called Ideas and it’s available in the online version of Word. It also does much more than tell you when you’ve misspelled a word; it will:

Read more about it here:

OpenAI has open-sourced a larger version of their GPT-2 language model. They previously only released a 117 million parameter version, citing their concerns for abuse of the full-size model by malicious actors, a decision that much of the community disagreed with. (See DT #8 for my take on that debate). OpenAI has now changed course and released a larger version, GPT-2-345M, which is nearly three times larger than the original release. Additionally, they’re giving select partners, like established university research labs, access to the even larger 762M and 1.5B parameter versions. It’s good to see OpenAI responding to the community’s criticism like this, and I’m excited for the art projects and demo sites (such as the one I featured below) that this medium-sized model will spawn. More here:

Google announced the winners of the Google AI Impact Challenge. The challenge is part of Google’s AI for Social Good program, and this year it gave out $25 million in grants consisting of cash from Google.org and Google Cloud credits + consulting. I especially love these three projects:

Read about all the 20 grantees in this blog post by Google.org President Jacqueline Fuller and Google AI SVP Jeff Dean: Here are the grantees of the Google AI Impact Challenge. 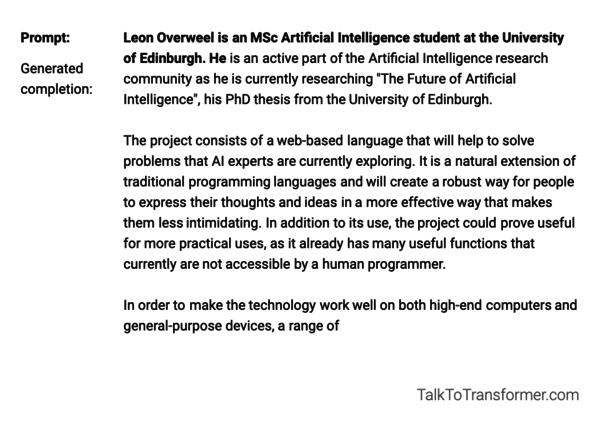 What OpenAI’s medium-size GPT-2 model thinks I’m up to this year. (Adam King)

Adam King launched Talk to Transformer, an interactive website for OpenAI’s medium-sized language model. Thanks to OpenAI’s open-source release of a larger version of GPT-2 and King’s engineering work building a site around it, anyone can now generate completions of short text prompts. I tried it out above with a prompt of what I’m currently up to (bold text), and it generated a fairly realistic-sounding biography (regular text). I don’t think I’ll be writing a PhD thesis during my MSc, though…

I encourage you to play around with Talk to Transformer and share your generated completions with friends: it’s a lot of fun and, more importantly, it spreads awareness of the capabilities of these AI models to a broader audience (see DT #8).

If you enjoyed this issue of Dynamically Typed, why not forward it to a friend? It’s by far the best thing you can do to help me grow this newsletter. 😇