Hey everyone! This marks the third and final Dynamically Typed issue of 2018, and also the last one before I launch this project publicly in the new year. As I get ready to launch, I’ve played around with the formatting of the newsletter a bit and added this fancy new banner, which is a deep dreamed version of a photo I took in California a few years ago.

KPMG published the 2018 version of its Autonomous Vehicles Readiness Index. Unsurprisingly, the US comes in as #1 in the technology + innovation “pillar.” However, self-driving car adoption requires a lot of other pieces, like policy + legislation, consumer acceptance, and infrastructure, where the US does not do as well. Overall, the report ranks the Netherlands as #1 because of its top position in infrastructure and top-four position in the other pillars. Personally, I don’t think this overall ranking actually tells us much (the scoring and weighting of scores is pretty arbitrary, and I think that tech + innovation should outweigh the other pillars by a lot), but I found the country-specific analysis pretty interesting. Full report: Autonomous Vehicles Readiness Index (PDF)

A while ago, the media noticed that Google Translate displayed gender biases: it might translate a phrase like “they are a doctor” in a language that doesn’t gender its pronouns to “he is a doctor” in English, assuming that someone who is a doctor is probably a man. Google has fixed that now: Providing Gender-Specific Translations in Google Translate (Web)

Something cool that popped up on Product Hunt this week: remove.bg, a free service that uses ML to remove the background from photographs of people. For now, it only outputs small (500 pixel wide) images, but I wouldn’t be surprised to see a full-quality paid version of the service soon.

My friend Wouter also sent me this cool AI product I hadn’t seen before: Lobe is a tool that lets you visually build custom deep learning models. Definitely want to play around with this over the break: Lobe (Product Hunt) 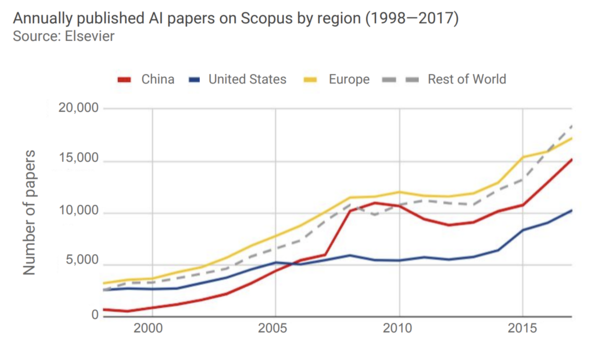 Europe is the largest publisher of AI papers (2018 AI Index)

According tot the 2018 AI Index, machine learning models are now solidly beating humans at many Computer Vision and Natural Language Processing tasks; some notable additions to the list since 2017 include skin cancer classification, prostate cancer grading, speech recognition, and Chinese-English translation. The report also has a lot of up-and-to-the-right graphs, from enrolment in AI majors at university and research publications, to job openings and startup funding. More here:

Tom Simonite at Wired interviewed “Godfather of Deep Learning” Geoff Hinton. On AI regulation, Hinton thinks the focus should be on its performance, not on explainability, since there’s not much you can explain about the billion weights in a deep neural net. He also thinks there’s a problem in the research field that there’s a big focus on fractional percent improvements on a few well-known datasets instead of trying radical new ideas that might not perform so well across the board on every problem. Full interview: Google’s AI Guru Wants Computers to Think More Like Brains (Web)

Jennifer Valentino-DeVries (et al.) at the New York Times wrote a really great piece on the sketchy weather, parking, etc. apps that use your phone’s GPS to track your location every few minutes and send that data to sometimes up to 40 (!) different companies to re-sell in creepy ways:

For example, someone may search online for healthy recipes, but GroundTruth can see that the person often eats at fast-food restaurants. “We look to understand who a person is, based on where they’ve been and where they’re going, in order to influence what they’re going to do next,” Ms. Greenstein said.

Tell All Digital, a Long Island advertising firm that is a client of a location company, says it runs ad campaigns for personal injury lawyers targeting people anonymously in emergency rooms.

After reading this, I went through my phone’s settings and turned off GPS access for quite a few apps. Here’s the full article, which also has some incredible work by the NYT’s interactive graphics team: Your Apps Know Where You Were Last Night, and They’re Not Keeping It Secret (Web)

In the same vein: I used to solidly be in the “Facebook doesn’t sell your data; it only sells ads targeted using your data” camp, but this NYT Opinion piece by Michal Kosinski has changed my mind. In a nutshell, it’s pretty easy to hyper-target ads, track which specific ad someone clicked, and then link the ad’s targeting characteristics to that person’s username or IP address. In a roundabout way, you’ve now used the ad to purchase data on that person’s gender, age, location, political beliefs, level of education, etc., which you can store and correlate with any other data you have about the person. Read the full article here: Congress May Have Fallen for Facebook’s Trap, but You Don’t Have To (Web)

From a few weeks ago: Kara Swisher interviewed the Google Walkout organizers. It’s an hour long, and a great look inside what Google employees worry about: After 20,000 workers walked out, Google said it got the message. The workers disagree. (Web, Podcast) 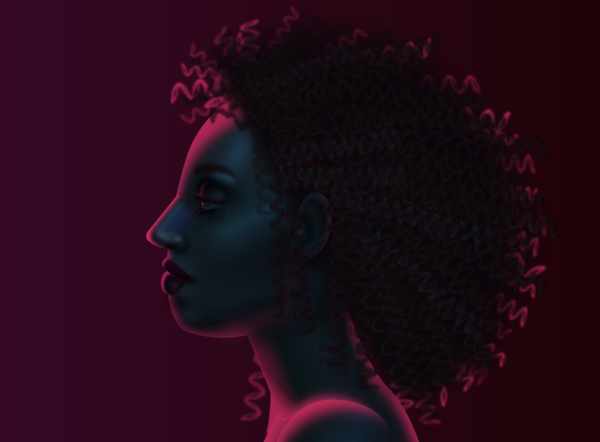 The above picture is made entirely in CSS! I’ve come across Diana Smith’s work before, but this is definitely my favorite so far. It’s really fun to inspect-element different parts (like the hair) and toggle CSS properties off and on to see how the image changes.

The NYT also had a nice profile on Donald Knuth, the author of The Art of Computer Programming, and creator of LaTeX (?!) this week. One of my favorite quotes of his is “Premature optimization is the root of all evil.” Check it out: The Yoda of Silicon Valley (Web)

4. 35% of Rwanda’s national blood supply outside the capital city is now delivered by drone.

42. Unicode, the international standard for letters, characters and emojis, has 137,439 entries. It includes a group of ‘ghost characters’ (妛挧暃椦槞蟐袮閠駲墸壥彁) which have no known meaning.

Thanks for reading! As always, please let me know what you thought using the buttons below or by sending me a message. Happy new year!